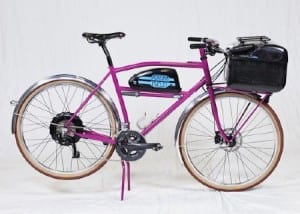 Tony Pereira designsTony Pereira designs bikes that he’d like to ride, so when he began thinking about the bike he’d enter in this past weekend’s Oregon Manifest challenge, he wanted something with his retro-inspired style that could do a bit more than what he typically rides. The challenge asked bike designers to create a utility bike, a vehicle for the “millions of Americans who want to live healthier, more sustainable lives, but don’t think of themselves as ‘cyclists.’”

Pereira’s bike, painted fluorescent pink, took first place. It features an electric assist, which can boost a rider’s power, a lockable storage container, and a sound system that lets the rider pump music or NPR. This bike, Pereira told the judges, could replace a car for many Americans who are turned off by the idea of commuting by bike. …

Could This Bike Replace Your Car?Read More »

We found this article in Earth911.com about daylight saving. Please visit their website where you can find recycling centers near you in the largest recycling directory in the U.S.

This Sunday, most Americans will set their clocks ahead an hour for daylight saving time. But does the original motivation for “springing forward” – saving energy by taking advantage of summer’s extra hours of sunlight – still hold weight in today’s world?

While Benjamin Franklin originally conceived of the idea for daylight saving time, laws mandating a national time change weren’t instituted in the U.S. until World War I and II, in an effort to conserve the fuel needed to produce electric power, according to the Institute for Dynamic Educational Advancement’s (IDEA) Department of Commerce-funded “online museum exhibit.”

Since World War II, a mandatory national daylight saving time was only re-established once more – this time, to save energy during the 1973-74 Middle East oil embargo.

Over the years, Congress has extended the length of daylight saving time several times with the goal of achieving additional energy savings. Starting in 1986, daylight saving time began on the first Sunday in April and ended on the last Sunday in October. But since 2007, Americans were asked to set their clocks forward on the second Sunday of March and move them back on the first Sunday of November.

It’s a relatively simple idea: If we set our clocks an hour ahead, we can make the most of the longer periods of daylight during summer, gaining an extra hour of sunlight in the evening when we can spend time outside of the house and avoid using home lighting and appliances. If we don’t move the clocks forward, we waste that additional hour of sunlight in the morning, which may occur before many of us have even gotten out of bed.

Try It Yourself: 7 Surprising Ways to Save Energy

The U.S. Department of Transportation (DOT) carried out a study of daylight saving time’s effect on energy use in 1975, according to IDEA, and found that it cuts the entire country’s electricity usage by about 1 percent each day – an amount that may seem small, but is actually quite significant considering the nation’s enormous energy consumption. The DOT attributed these energy savings to less electricity used to power home lighting and small appliances like TVs and stereos, finding that an average ‘70s home used 25 percent of its electricity to power lighting and appliances and that much of that consumption occurred in the evenings when families were home from work and school.

The Department of Energy (DOE) confirmed daylight saving time’s potential to conserve energy in 2008, when the agency made a report to Congress, concluding that 2007’s extension of daylight saving time by two months reduced national electricity usage by an additional 0.5 percent per day. The report also found that southern states benefit the least from the time change, possibly due to increased air conditioning use in the evenings, and that California saw the greatest energy reduction: 0.93 percent per day.

“The fact that daylight saving time saves energy is well established. That’s why countries adopt it whenever they have an energy crisis. It’s saving energy here [in the U.S.] and in 70 other countries around the world,” says David Prerau, author of “Seize the Daylight: The Curious and Contentious Story of Daylight Saving Time.” Prerau has also served as a consultant to Congress and the United Kingdom’s Parliament on daylight saving time legislation.

Daylight saving time doesn’t just decrease the amount of energy consumed, Prerau says, but it also changes when energy is used, spreading it out more evenly over the course of a day and reducing peak times of energy demand when energy providers have to run their least efficient backup power plants.

The extra hour of daylight in the evening also has advantages beyond conserving energy, Prerau says.

“It reduces traffic accidents, and some countries consider that the most important benefit,” he says. “There’s also the public health benefit: People can stay outdoors longer and exercise.”

Daylight saving time may even help the economy, according to Prerau. While less time spent at home in the evenings may not help the broadcasting industry – Prerau points to studies that show a decrease in TV ratings during daylight saving time – other businesses may cash in, since people tend to shop more when they’re out of the house.

One common criticism of daylight saving time is that an extra hour of daylight will encourage Americans to drive more and consume more fuel, cancelling out any energy saved from not using indoor lighting and appliances during that time. But Prerau calls attention to the DOE’s 2008 report, which found no increased traffic volume and oil consumption during daylight saving time.

Further skepticism has been fueled by the findings of a 2008 National Bureau of Economic Research study, which examined Indiana’s statewide adoption of daylight saving time in 2006. Because 15 of the state’s 92 counties observed the time change prior to 2006, researchers were able to compare energy usage before and after daylight saving time was introduced.

Rather than find a 1 percent decrease in electricity consumption, as predicted by the DOT’s 1975 report, researchers saw an increase in electricity demand, especially in the fall months, when electricity consumption rose between 2-4 percent. Why the growth in energy usage? Researchers theorize that an increased demand for cooling more than offset the reduced demand for lighting: That is, Indianans returning home in the evening didn’t need to turn on the lights, but they did need to turn on the air conditioning to cool down from the extra hour of hot sunshine.

But Prerau thinks this kind of study misses the mark because it focuses on too small of geographic area.

“The vast majority of studies – in the U.S. and in other countries – show that daylight saving time saves energy over the whole of the country,” he says. “The studies that found [an increase in energy use] studied just one state or one area.”

He also points back to daylight saving time’s original intent – encouraging people to spend time outside of their homes – which he says should decrease air conditioning use overall.

Prerau acknowledges that daylight saving time has its negatives, including darker mornings during fall, but maintains it is a simple, effective way to reduce energy use without raising taxes or adopting more regulations.

Plus, most Americans seem to like it, he says.

“Most people enjoy having that extra sunlight in the evening to get out of the house,” he says.

During October, Surfrider’s Rise Above Plastic (RAP) initiative is teaming up with clothing brand Rusty to celebrate Raptoberfest. They’ll be sharing plastic-related facts, as well as tips on how to reduce your own plastic footprint.

A little over 25 years ago three people in Malibu, California found out that their favorite wave was about to be destroyed. Think about that for a second.

Think about something you love… something that gives you enjoyment. Taken away. 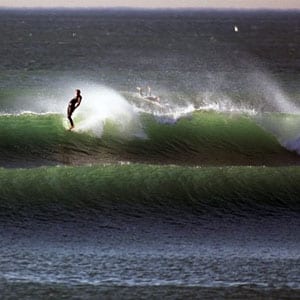 First Point, pictured to the right, the quintessential perfect, California wave was about to be destroyed. Those three people organized and worked with the local municipalities until they were satisfied that their efforts to preserve that iconic wave would be successful.

This was the genesis of Surfrider Foundation.

Today, Surfrider Foundation are doing this same thing in about 15 countries around the world.

You can take volunteer action to protect our ocean, waves and beaches through campaigns, programs and educational initiatives in your communities.

It seems easy enough to stop drinking water bottled in plastic, yet, we’re primed for convenience. It’s easy enough to buy a bottle at the convenience store, out at a sporting event, or on a long road trip.  And bottled water marketers are selling you a vision – spring pools of fresh water, mountain streams ripe for crisp, cool, refreshment. It’s a sham. Here’s a great infographic from the creative team at Term Life Insurance.