Of Mice and Men: How BPA Makes Men Less Attractive

Of Mice and Men: How BPA Makes Men Less Attractive 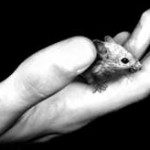