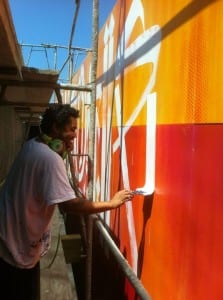 In June 2011, after purchasing the property located at 825 Berkeley Street, with his partner, Adam Corlin wanted to bring awareness to the impacts that are occurring in the world’s oceans. After much thought, Adam decided that installing a public art display would be a great way to impact the greater community by bringing the vision of Restoring and Protecting the World’s Oceans. In doing so, Adam Corlin contacted his friends at Heal the Bay and outlined his thoughts and ideas for the project, which would ultimately become, Oceans @ Risk.

Once Heal the Bay was on board, Adam set out to find the artist to complete the project. Through a mutual friend, Randy Wild, Adam was introduced to Kelly “RISK” Graval, who agreed to join in the project. Adam approached “Risk” after reading a disturbing interview about “Risk” and fellow artists facing resistance from city officials, to paint legally in Los Angeles. When Adam approached Risk about painting his home to make a statement, he was shocked when Risk replied “that’s cool but let’s do something for the greater good.” So the two formed the AT RISK foundation and committed to make a difference.

Since 1985 Heal The Bay is committed to protect Southern California’s coastal waters and watersheds, including Santa Monica Bay. Our rivers, beaches, and beautiful oceans are at risk. We are proud to bring light to this subject and make a substantial contribution via this Mural. All three of us are committed to helping Heal The Bay meet this incredible challenge.