THAT'S NOT SAND, IT'S A BEACH OF DEAD FISH

THAT'S NOT SAND, IT'S A BEACH OF DEAD FISH 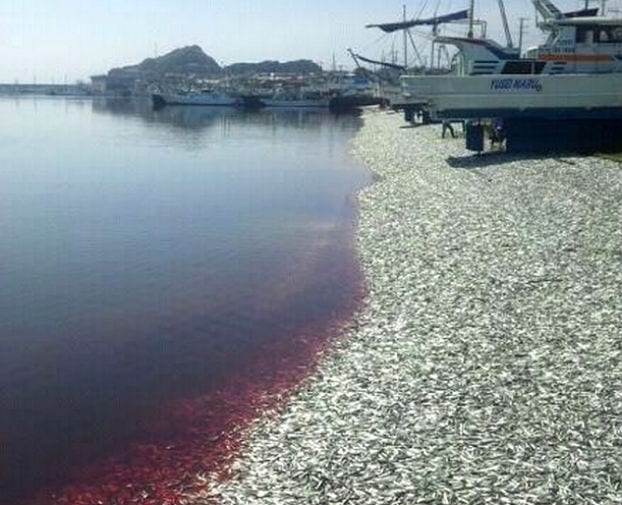 In Japan, Twitter user Yumi Hareyama shared a photo of the dead sardines with a caption that read in part, "Try to clean the sea with everyone."

Starting June 3, massive amounts of dead sardines began clogging a fishing port called Ohara, located near Isumi City on the western side of Japan. A blogger named Kay for the Asian news site RocketNews24.com reported on Tuesday that the port was closed due to the emergency. Locals trucked tons of fish to landfills, according to the Daily Mail’s Leon Watson.

No one knows exactly why this is happening, but other communities know the horror firsthand.

In March 2011, millions of sardines suddenly died in King Harbor Marina in Redondo Beach, Calif. The cleanup cost more than $100,000 and required a crew of 200 workers frantically using a variety of methods to collect the silvery fish.

At the time, the Los Angeles Times reported that scientists and wildlife officials believed windy conditions or possibly an oxygen-poor water column in the ocean caused the sardines to sweep into the harbor with a storm the day before. As a result, the oxygen levels in the area may have dipped too low and killed the fish.

In May 2011, the largest fish-kill in Georgia’s history occurred in the Ogeechee River. More than 38,000 dead fish were found near an outfall pipe for King America Finishing, a textile processor, the Augusta Chronicle reported. The state’s environmental protection division said the fish died from a bacterial disease caused by environmental factors and it fined the company $1 million for discharging fire retardant through an unauthorized line.

Other areas have experienced massive fish kills from algae blooms, red tides, toxins, changes in water temperature, and diseases. Commonly a lack of oxygen is at the root of the problem since fish need to absorb dissolved oxygen to live.

In Japan, Twitter user Yumi Hareyama shared a photo of the dead sardines with a caption that read in part, “Try to clean the sea with everyone.”